Frank Maurice Coombs was born at Dulwich, London in the autumn of 1896 and was baptised at the St John the Evangelist Church, Goose Green, East Dulwich on 26th December 1896. He was the last of four sons born to Charles and Louisa Coombs who married at St Andrew’s Church in Camberwell on 10th September 1887, Charles being described as a printer. Louisa Seaton was a music teacher in the 1881 census when aged 20 and she lived with her parents in Peckham Rye, Camberwell.

In May 1911, the Coombs family moved from 14, Keston Road, East Dulwich to 13 Burnaby Gardens Chiswick. Along with his brother Leslie, Frank was amongst the first to join up with both appearing in the first list of “On Service” in St Michael’s Church September/October 1914 Parish Magazine. He had joined the London Rifle Brigade and was stated to be “drilling” in London. In the same magazine it was noted that “During the absence Mr H G Carter “on service,” the superintendence of the Children’s Service had been kindly undertaken by Mr Fred Howard. During the last few weeks he has had the help of Mr Frank Coombs, but the latter has volunteered and expects to leave home soon. By December 1914, Frank was noted as having left London for the Haywards Heath Training Camp.

It was not until November 1915 that Frank was moved from the “At Home” to “In France or Belgium” list of the “On Service” section of the Parish Magazine. He was part of the 56th (1st London) Division which saw action at Gommecourt, in the Somme, France. 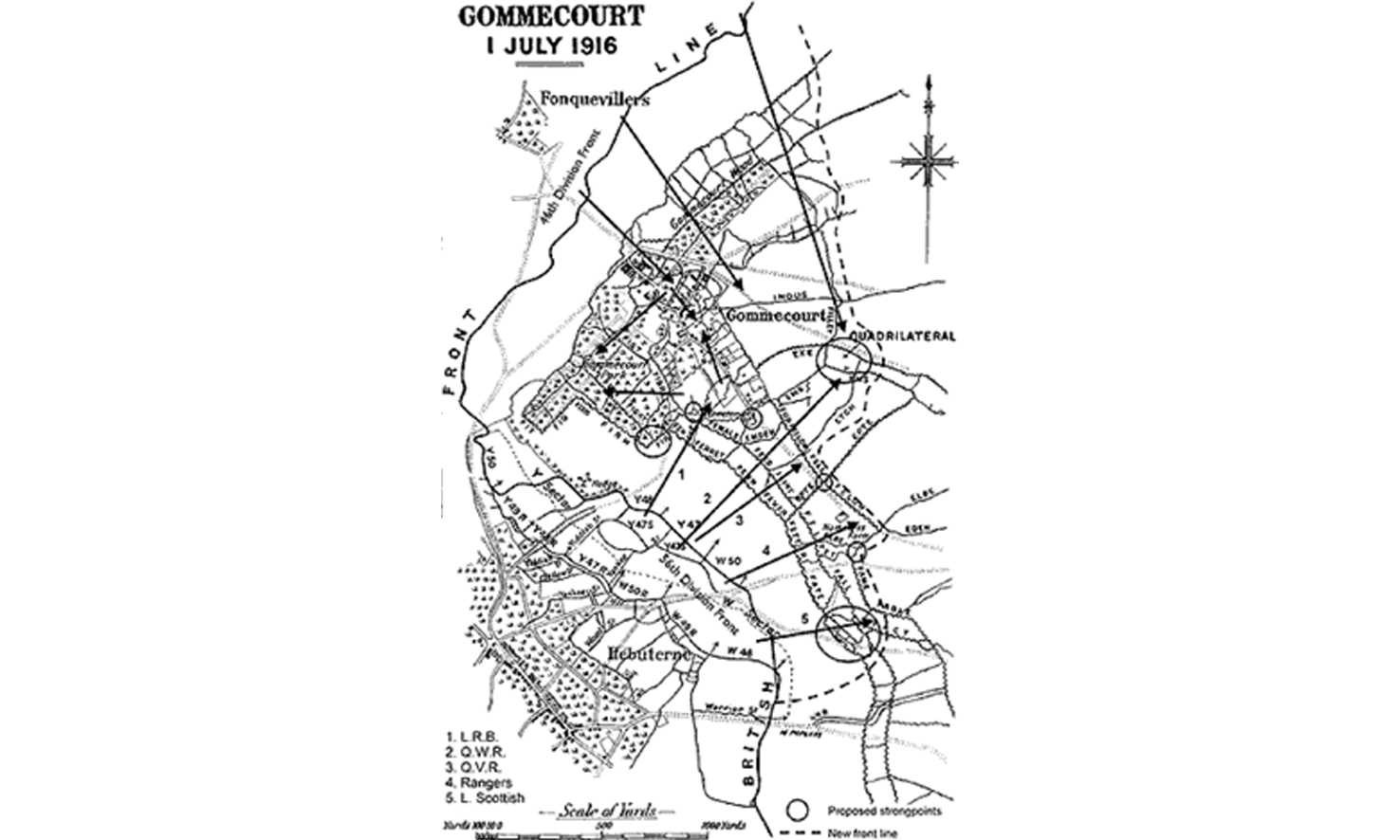 Gommecourt, located about eight miles north of Albert, was the site of a 'supplementary' operation on the 1st of July, 1916, with two aims - to draw some German reserves from the main Somme offensive further south and also to try and eliminate a German salient centred on Gommecourt Wood. The attack was mounted by VII Corps, with the 46th Division attacking to the north of the salient, and the 56th to the south. The advance of the 56th Division went quite well initially, with the enemy's first two lines taken, but there was more resistance from the third line.

However, the 46th (North Midland) Division did not fare so well. The wire in front of the German trenches had not been cut by the barrage, and although a few men of the 1/6 South Staffords and 1/6 North Staffords did get into the enemy's front-line trenches, they and the other attackers had little success and were driven back with significant losses. To the south, men from the 56th (London) Division eventually withdrew in the evening, and the net gain that day here was effectively zero.

The 56th (1st London) Division was formed in February 1916 and by the time of Gommecourt it comprised the 167th, 168th and 169th Brigades. The 169th was made up of Queen Victoria’s Rifles, Queen’s Westminster Rifles and the London Rifle Brigade. On the 56th Division’s front the two brigades allocated to the attack were 168th and 169th with the 169th extreme left. Three of the London Rifles Brigade Companies, D to the right, C in the centre and A on the left were the attacking ones with Company B, of which Frank was a member, staying in reserve. By the end of 1st July, the casualties of all three battalions were heavy: Queen’s Westminster Rifles 73%, Queen Victoria’s Rifles 66% and London Rifle Brigade 58%. The London Rifle Brigade started the day with 23 officers and 803 other ranks. Casualties were 19 officers and 569 other ranks. Being held in reserve, B Company’s figures were less worse than the three attacking companies. Nevertheless 84 of other rank casualties were from Company B comprising 13 killed, 44 wounded, 3 wounded and missing, 24 missing. Of these 11 of the wounded had returned by 23rd July.

Frank Coombs was initially listed as missing. However as the September/October edition of the Parish Magazine was going to press, news reached the Coombs family that Frank was presumed killed in action in the same month as his brother Leslie died of wounds.

The next edition confirmed the sad expectation about Frank even though there was no totally firm news.

Their father, Charles Coombs continued to serve the church as a Churchwarden until his sudden death age 65 on Michaelmas Eve 1921. He had been active in the Church since the family’s arrival in the district in 1911 and during the WW1 absence of the vicar and other churchwarden “practically…….. the guidance of the parish was left in his hands.” There is a Memorial window to him in the Sanctuary at St Michael’s. For more detail see the page long article about him in the St Michael’s Saints, 2009.

In June 1922, there were happier times for the family as Ralph, the younger of their two surviving sons, married Flora the eldest child of St Michael’s first vicar, Rev L McNeill Shelford. The marriage was extensively covered in both in the Chiswick Times of 30th June 1922 and the July/August edition of the Parish Magazine.

Ralph was a most capable amateur woodcarver and produced the Memorial Tablets relating to his father’s Memorial window and his wife’s grandfather, Prebendary Leonard Shelford, St Michael’s Church’s Patron which can be seen on the Sanctuary walls.

Ralph and Flora had two children, a son Michael and a daughter Sallie. Through this project, contact was made with Sallie. In February 2014, she visited Chiswick for the first time in some 65 years. During her time in Chiswick she was a most welcome guest at St Michael’s Church and was able to meet the current vicar, Rev. Martine Oborne.