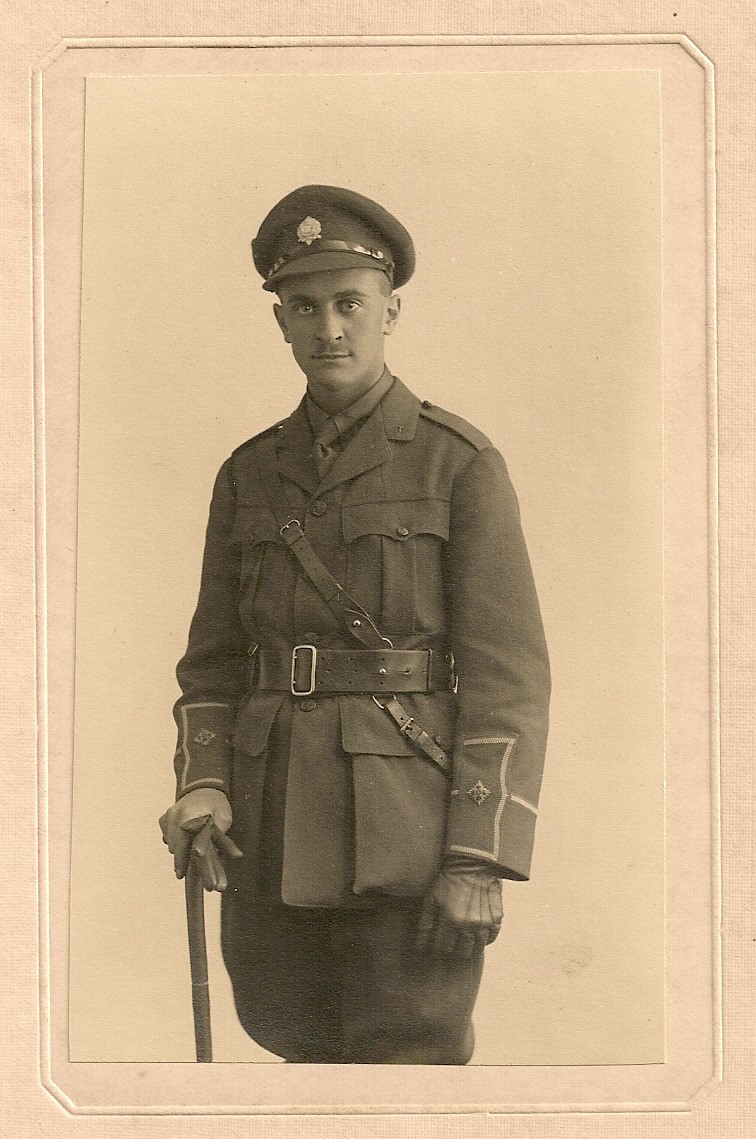 Ivor Pogose and his family

Ivor Pogose was born on 28th May 1895 at 82 Montpelier Road, Brighton, Son of Nicholas Marcar Pogose and Margaret Pogose. At the turn of the century the family moved first to Fulham and then, in about 1905 to 68 Woodstock Road, Chiswick (pictured below).

Sadly Ivor’s mother, Margaret, died in 1907at the age of 45. They had 7 children; 5 girls and 2 boys. The other son, Ronald died at the age of 3, Mignon died as a baby, Vivienne at 27 and Muriel, the eldest, at the age of 36 in 1920. His other two other sisters, Esme and Viola both lived into their 80s, but neither married or had children.

The 1911 census shows that Nicholas Pogose, whose stated occupation at the time was stockbroker, was living at 48 Burlington Avenue, Kew with second wife May. Nicholas had 2 sons from his marriage to May; Aubrey was born in 1909 and was sadly killed in an air raid in London in 1941, along with his two young sons. The other son, Philip, was born just after the 1911 census and he had two sons Dennis and Barry. Philip served as a gunner in WW II and lived to the age of 67.

Ivor attended Arlington College, Chiswick from 1906 to 1911 where he became great friends with ‘Fred’ Frederick George Carrington Howard of 9 Burnaby Gardens, Gunnersbury. The two boys were confirmed together and Ivor was a regular communicant at St Michael’s Church. His name was included on the St Michael’s Roll of Honour at the request of the Howard family and Mr Howard is listed as one of his next of kin, alongside Ivor’s father, Nicholas. Ivor’s residence in his probate record is given as 16 Crossfield Road Hampstead, but it is not known what his connection with Hampstead was. By the time that Ivor enlisted in September 1914, the family were living in Kennington Park Road, but by 1919 the family were living at Flat 2, 2 Acre Lane, Brixton.

Ivor Pogose enlisted at Westminster on 5th September 1914, giving his occupation as Railway Clerk (which interestingly was Mr Howard’s occupation, so perhaps Mr Howard had some influence there), and joined the 10th (3) Bath Kings Royal Rifles. He was posted on the 9th September and made a Lance Corporal on 14th September 1914. When seeking a commission in May 1915, he was given a character reference by Mr Thomas Williams, Head Master of Arlington Park College**. He was given a commission and as a 2nd Lieut served with D company, 5th Battalion London Rifle Brigade, 56th (1st London) Division and was discharged from KRR to join LRB on 4th June 1915.

Ivor had several cousins who served during the war. Norman Pogose, who had spent a number of years in India, received a commission in the Indian Labour Corps after responding to an appeal in the ‘Morning Post’ on 25th July 1917. Born on 22nd July 1879, he was a 38 year old Barrister living at 24 Florence Road, Ealing, who was educated at St Pauls, but on his application for a commission, he also states as relevant experience “organising a working labour for mines in India” and in reply to the question whether he is able to ride he states “a little”. Norman survived the war and was invalided out in 1919, arriving back at Southampton on 18th May 1919. Norman’s sister, Gladys Constance Pogose served in the Women's Army Auxiliary Corps whilst Cousin Elaine Pogose served in the Voluntary Aid Detachment. Fred Howard, who was 2 years younger than Ivor, first appears in the Parish Magazine ‘on service’ lists in January 1918 as a Sapper in the Royal Engineers and is listed from March 1918 onwards as having the rank of Corporal.

Ivor “Jerry” took part in the diversionary attack on Gommecourt on 1st July 1916 and died of his wounds the following day, 2nd July, not 1st July as originally stated in official records, and on his grave stone. A fact that his father, Nicholas, pointed out to the war office in a letter dated 5th December 1919.

At 11pm on 30th June “Jerry” Pogose led a patrol out into No Man’s Land to check the state of the German wire along the eastern edge of Gommecourt Park. He returned safely to report that the German wire had been cut enough to allow an attack on the German trenches.

A tape had been laid out 150 yards from which the assault was to be launched. At first the men of 5th Royal Rifle Brigade met relatively little resistance from the Germans in the forward trenches, catching many in their dugouts, or as they tried to scramble out of them. D company secured Fen and Ferret and worked their way up the almost deserted communication trench Exe and turned right into Eck trench. The trenches and wire had been heavily damaged by British fire prior to the assault, but gave little shelter to the troops. At 8am, Captain de Colgan sent a confident and optimistic report back down Exe trench. D company were able to consolidate their position in Eck by rolling out five rolls of concertina wire, and three of barbed wire along the side of Eck trench facing ‘the maze’ and the village. Unfortunately, by this time, the attack from the 46th division was almost over, so although they didn’t yet know it, the Londoners were effectively on their own. 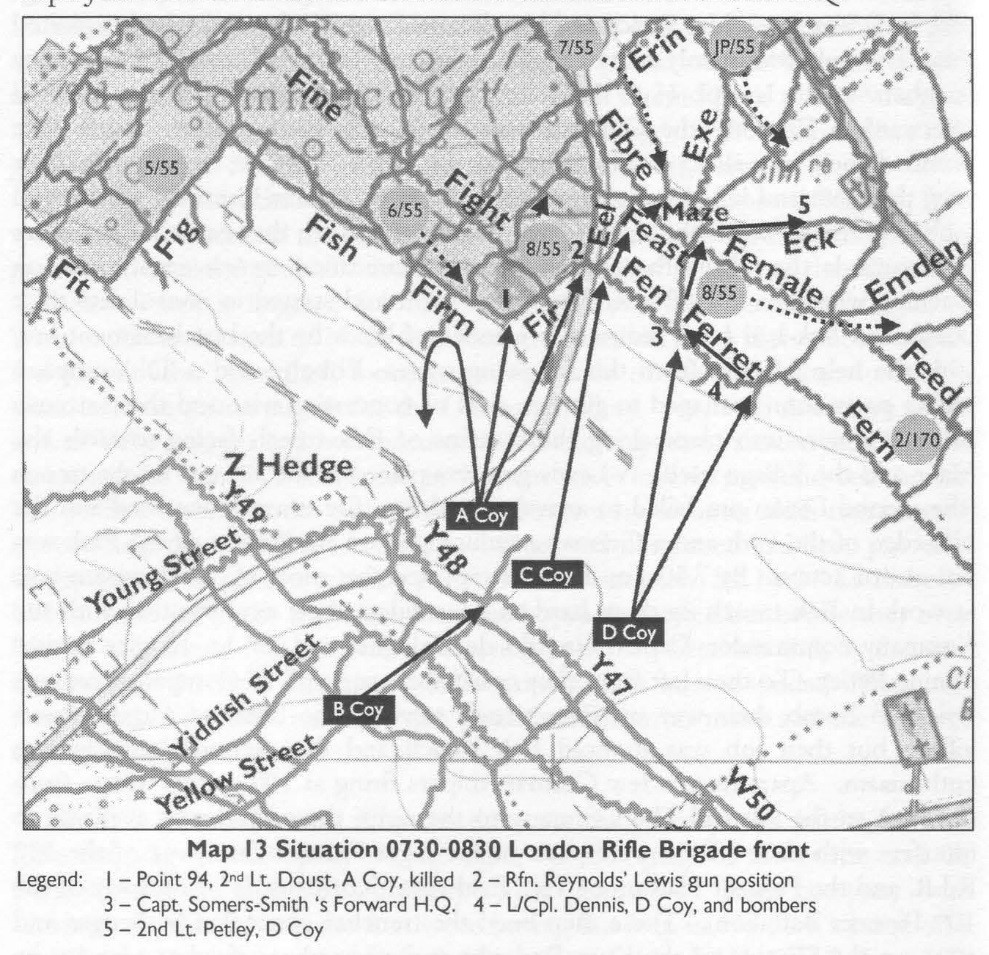 However, German troops in the trenches hidden by hedges and trees to the South East halted any further advance by the LRB, harassing them with rifle and grenade fire. Meanwhile, the Germans were intensifying their barrage and the machine guns in Gommecourt Park were beginning to take their toll. The LRB were beginning to find it difficult to hold their positions, but D company still held Eck trench, waiting for the planned assault on the Park and Village later in the day.

By 10.30 there was a danger that the Germans would succeed in driving a wedge between the Combined QWR & QVR force and the LRB and as the German attack continued to intensify, the men trying to cross No Man’s Land with ammunition supplies were being mown down, as were the men of the 1/3rd Londoners who had been tasked with digging a trench across No Man’s Land from ‘Yellow Street’ to Exe.

At noon, Captain De Cologan ordered D company to move left back down Eck towards Exe and by 1.30 the British were in retreat, heading back across No Man’s Land as best they could, but many were still trapped in the German trenches and at 4.30 the LRB were still trying to extricate themselves from Eck. They withdrew, with difficulty, to Fen & Ferret where they continued to hold out until by 7.15 they had to abandon Fen but continued to defend a short stretch of Ferret.

They were down to about 30 men by 8.30 and decided to retreat back to the British lines, reluctantly leaving the wounded behind. The officers were the last to retreat with most of them being killed as they headed out into No Man’s Land and as the Germans over ran the position, Captain de Cologan, who had continued to hold the position whilst his men retreated, was captured.

We do not know at what point in the day Ivor Pogose was wounded, but late on the night of 1st July Captain Wallis of the London Riffle Brigade went out into No Man’s Land in search of Ivor who had been reported as lying wounded out there. Wallis singlehandedly rescued Ivor and brought him back to the lines, but tragically Ivor died of his wounds the following day (2nd July) at the Main Dressing Station, Couin where he was buried in the British Cemetery. The casualty rate for the London Rifle Brigade was a horrific 71%, with 19 out of 23 officers and 569 out of 803 other ranks, being wounded, killed or missing. Only 82 wounded are listed as “returned by 23rd July”

Ivor’s personal effects were returned to the family, and were very minimal:

Ivor’s nephew, Dennis, says that Ivor’s father, Nicholas, was so distraught at losing his son that he wrote to King George V begging for a commission, which he was granted in spite of being about 57 years old at the time. He served with the Indian Labour Corps and survived his service, but his eyes were poisoned by mosquitos when in Belgium. He suffered with this and other ailments until his death in 1932 at the age of 71 years.

An extract from Probate of Will, dated 25th August 1916, records Ivor’s eldest sister Muriel Carmen Pogose as his executor.

In 1919 Nicholas started a campaign to get a posthumous bravery award for his son on the strength of a number of letters commending his bravery. On 18th June 1919, the War Office wrote a rather blunt letter to Nicholas, informing him that there was no “mention” of Ivor in the records. Nicholas responded by asking for an interview at the War Office in August when he would be home on leave, but clearly got no satisfaction from this interview because on September 5th a slightly exasperated note is entered on Ivor’s service record stating that they have already written to him once “re the impossibility of a posthumous award, except a V.C.” and they go on to state that he is “very difficult to convince” but “perhaps your dept could convince him”. The result of this request was a rather more considerate letter explaining that recommendations have to be made by the commander-in-chief in the theatre of war, and cannot be made by the war office, but the letter goes on to say “I am however, to convey to you this appreciation of the Secretary of State for War of the valuable services rendered by the late Lieutenant I.R.Pogose, and to express his warm sympathy in your great loss.”

There is no further correspondence recorded on the subject within the service records, but Nicholas does write to the war office mentioning that Ivor died on 2nd July from his wounds received on 1st of July.

The final correspondence on file is to do with Ivor’s estate. On 7th January 1920 Muriel states that her address is now 72 Carson Road, West Dulwich and on 27th January, she is sent £5.00 as a war gratuity for the death of an officer. The final document is an application from Nicholas, still living at the flat in Acre Lane, for a relative’s war pension.

On the 25th anniversary of his death, his two surviving sisters, Esme and Viola placed this announcement in a newspaper.

Ivor Reginald Pogose was buried in the British Cemetery Couin, 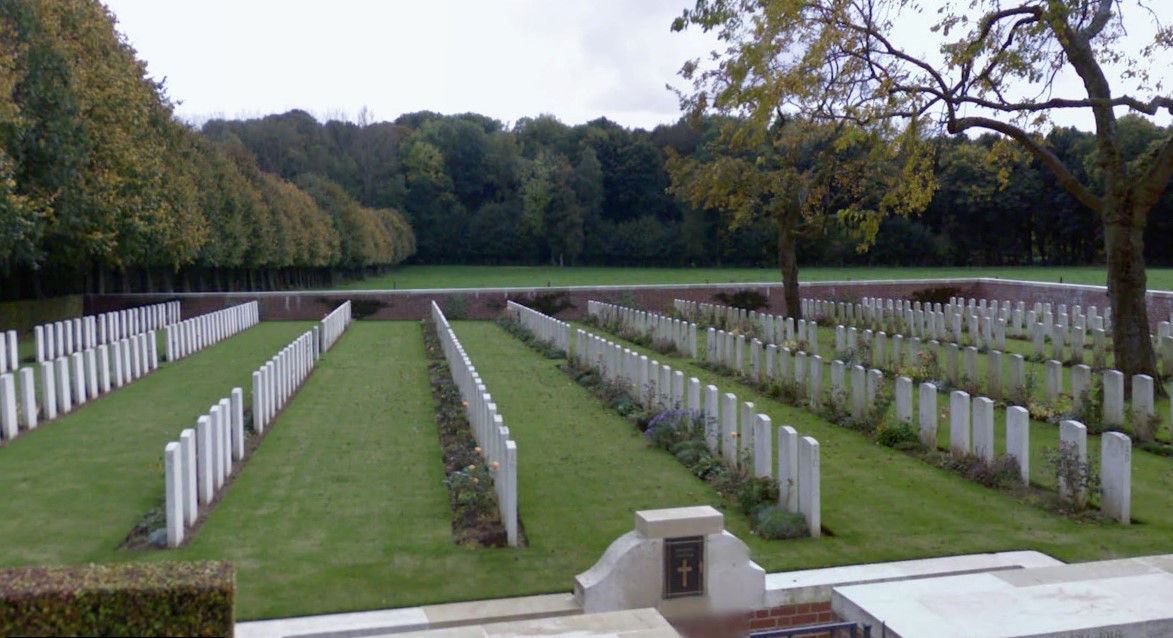 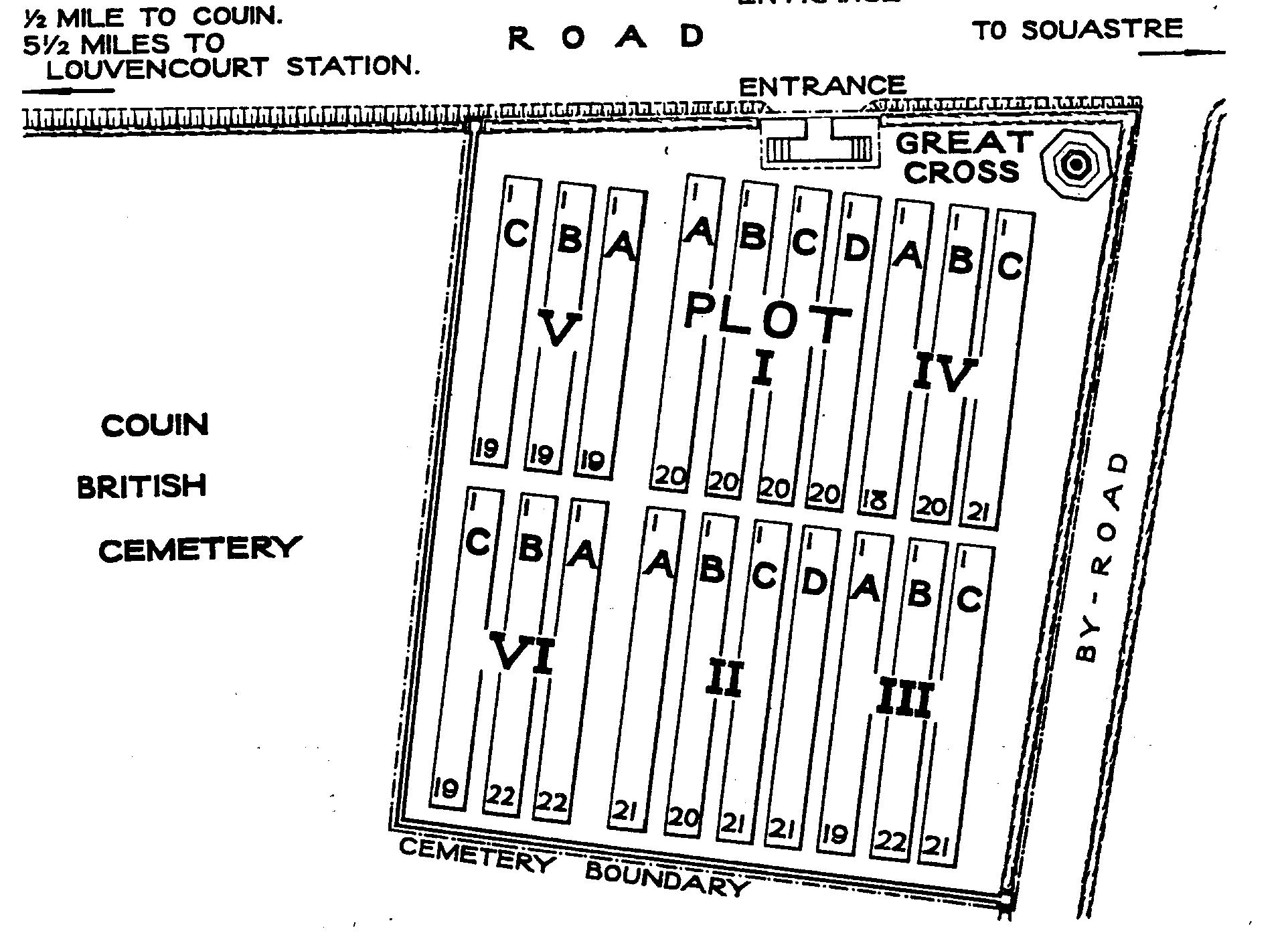 He is officially listed as having been killed in action on 1st July, although he actually died of his wounds on 2nd July. 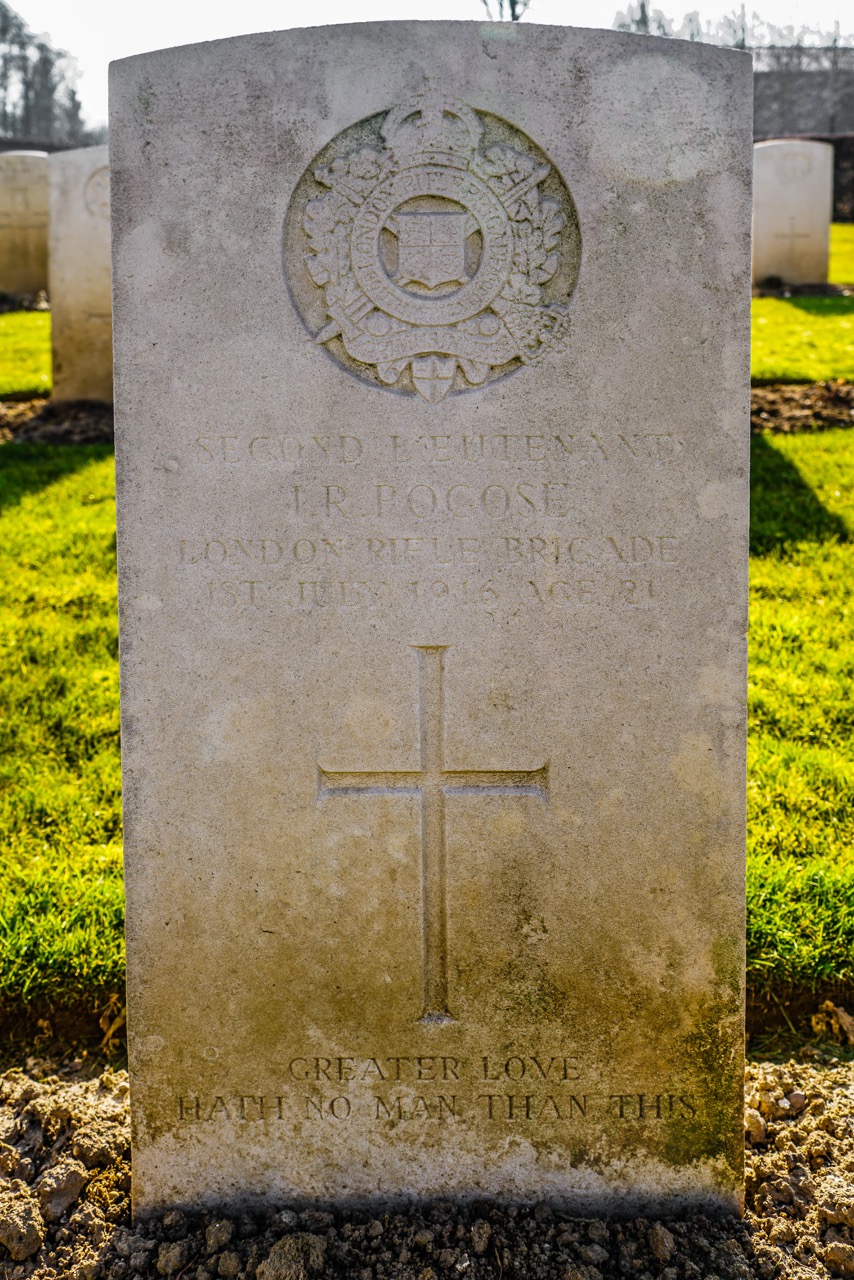 Above, Ivor’s Grave as it is today and below, the original wooden cross. 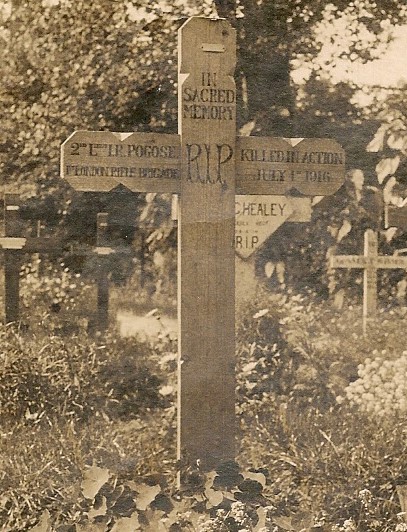 There is also a memorial to Ivor listed at Kensal Green (All Souls') Cemetery.

With grateful thanks to Ivor’s nephew Dennis for invaluable information and family anecdotes.