Leslie Howard Coombs was born at Dulwich, London in the summer of 1890 and was baptised at the St John the Evangelist Church, Goose Green, East Dulwich on 21st September 1890. He was the second son born to Charles and Louisa Coombs. Charles Coombs and Louisa Seaton married at St Andrew’s Church in Camberwell on 10th September 1887, he being described as a printer. Louisa was music teacher in the 1881 census when aged 20, she lived with her parents in Peckham Rye, Camberwell. In the 1911 census Leslie is described, age 20, as a Stockbroker’s Clerk.

In May 1911, the Coombs family moved from 14, Keston Road, East Dulwich to 13 Burnaby Gardens Chiswick. Along with his brother Frank, Leslie was amongst the first to join up with both appearing in the first list of “On Service” in St Michael’s Church September/October 1914 Parish Magazine. He had joined the 10th Battalion Royal Fusiliers (aka The Stockbrokers Battalion) and was stated to be at Colchester Training Camp.

Leslie was recorded as being “At Home” through early 1915 until September/October 1915 when his name was moved from the “At Home” to “In France or Belgium” list of the “On Service” section of the Parish Magazine.

10th Battalion, The Royal Fusiliers (City of London Regiment) was raised in the City of London in August 1914 as an independent unit named The Stockbroker's Battalion. In September 1914 they joined 54th Brigade, 18th (Eastern) Division in the Colchester area, when it was raised as part of Kitchener's Second New Army. That month was spent settling into new accommodation, becoming used to being away from home and adopting the routines of army life. Drill, marching and some route marches were combined with miniature range firing to get men working together and to assess their level of skill in the basic arts of being a soldier. The training syllabus followed by the volunteers was aimed at raising fitness, with drill to instil the instinctive following of commands and field craft.

Those men became Army troops in the same division in October and they moved to Andover in late February where trench digging practice became routine. In March 1915 the 10th Fusiliers transferred to 111th Brigade, 37th Division, moving in April in Cholderton on Salisbury Plain where the division was concentrating.

On 30th July 1915, they proceeded to France, landing at Boulogne on and concentrating near Tilques.

This chart from David Carter’s book, “The Stockbrokers’ Battalion in the Great War” illustrates the main areas of action of the Battalion during the First World War. 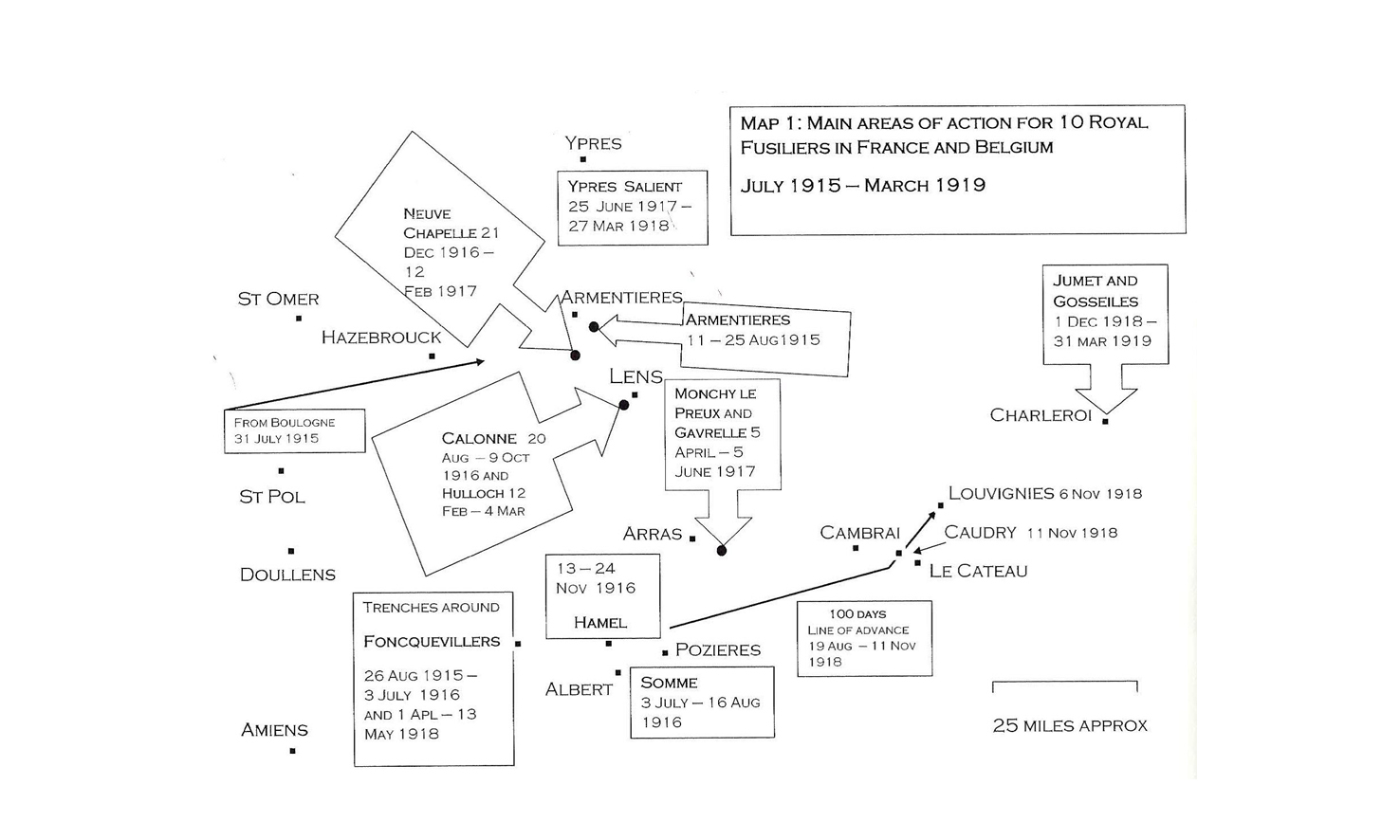 For the men of the 10th Royal Fusiliers, the morning of 1 July 1916, the opening of the Battle of the Somme, opened with the release of a smoke cloud over the German trenches opposite. The German artillery opened fire in retaliation and hit some of the trenches in the sector. Over the next three days shells landing around the trenches, and shrapnel over the brigade HQ in Berles caused casualties. The relative quietness of the sector was evident because on 3 July the battalion was ordered to withdraw from the trenches to be replaced by a battalion of the Staffordshire’s who had ‘suffered severely’ in the failed attack on Gommecourt. 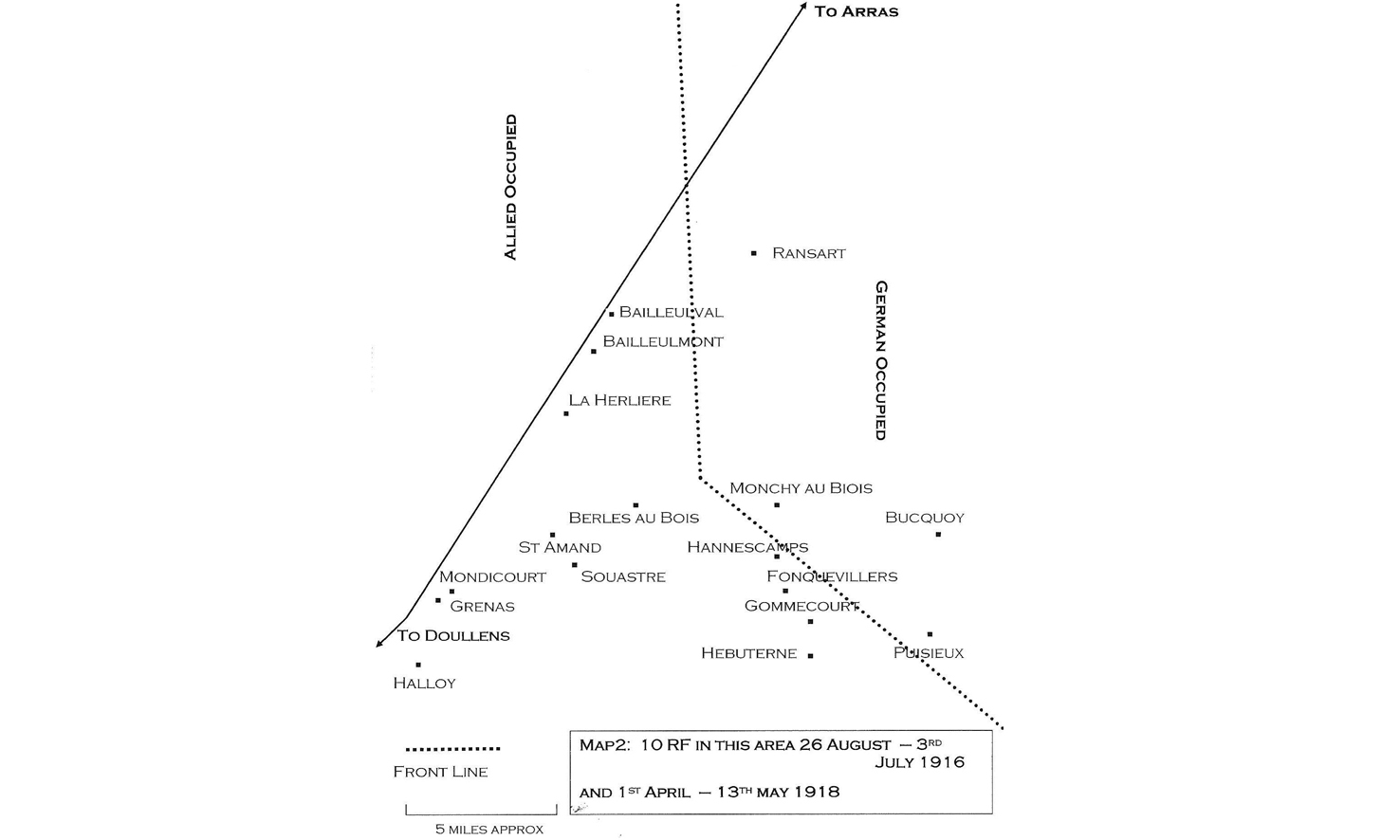 The losses suffered by the British on 1 July led to reorganisation of divisions. The 37th Division was split up and the 111 Brigade of which the 10th Royal Fusiliers was part, provided reinforcements for the 34th Division. This division had been in the attack of 1 July advancing from the Tara and Usna ridge, just south of La Boiselle.

Just one day after being informed of their transfer on the 5th, the 10th Battalion Royal Fusiliers was on buses and travelling by way of Amiens towards Albert to join the queue of troops preparing to move into the battle lines. 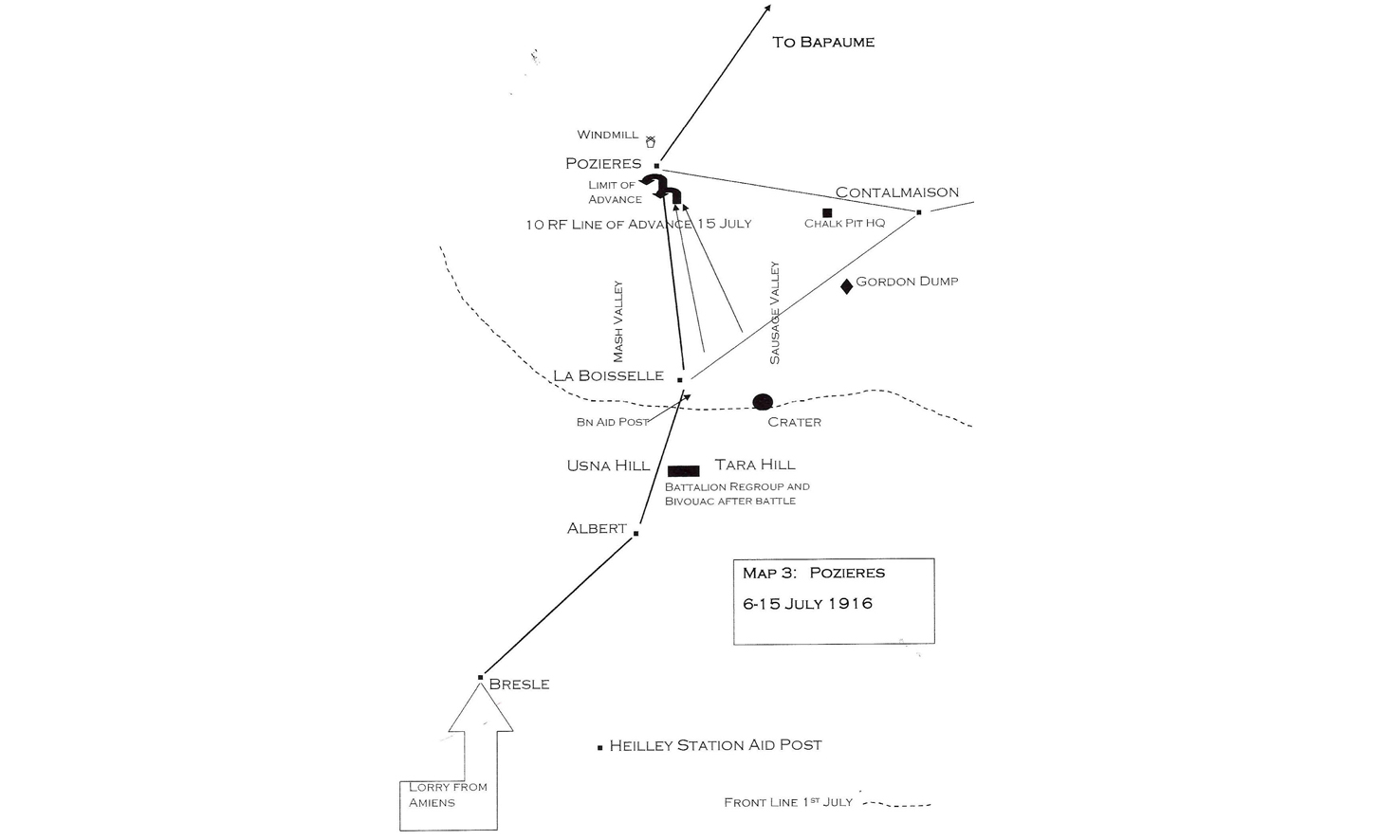 The evening of the 9th saw the battalion move into support positions behind the 13th Battalion, Rifle Brigade which was in the old German trenches east of La Boiselle. The trenches had been shelled and men spent every available hour deepening and clearing them to give cover from the artillery fire which was causing casualties.

The 13th Rifle Brigade attacked towards Pozieres on 10 July making some progress before facing intense machine gun fire and being forced to withdraw, their active numbers reduced to four officers and 400 men. C and B companies of the 10th Rifle Brigade were moved up to take their places in the front trenches to allow the survivors to withdraw. July 11 saw the 10th battalion in reserve but according to a note in the battalion diary, the ‘lost considerably’ from heavy shelling. The remaining companies, A (which included Leslie Coombs) and D were moved forward at 3pm to take over from the remnants of the 13th Rifle Brigade in the support trenches.

On the 12th, having spent the morning digging to connect the front line trench to the Contalmaison road, the battalion was moved back to La Boiselle and occupied trenches between a large crater, probably the one now called Lochnager to the south of the village, and Gordon Dump.

Although not involved in any direct attacks the attritional level of deaths and injuries continued and the commanding officer noted that they had in the last two days they had lost 134 killed and wounded. Amongst those was Private Leslie Coombs who was recorded as wounded/dying of wounds on 12th July.

As recorded in St Michael’s Parish Magazine for September/October 1916 below, the family received the sad news on 17th and at the same time there was concern for his brother Frank, also on active service.

It was subsequently confirmed that both Leslie and Frank Coombs had died during the Battle of the Somme.

Leslie Coombs is commemorated at the Puchevillers British Cemetery, France. 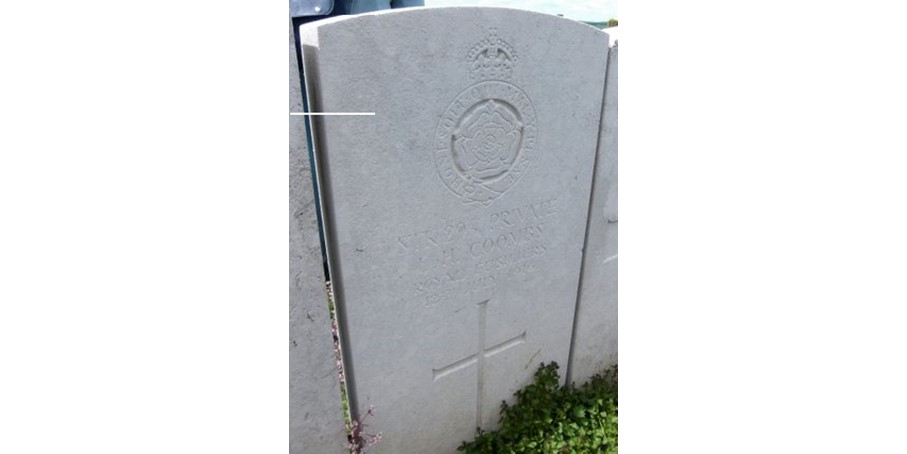 Their father, Charles Coombs continued to serve the church as a Churchwarden until his sudden death age 65 on Michaelmas Eve 1921. He had been active in the Church since the family’s arrival in the district in 1911 and during the WW1 absence of the vicar and other churchwarden “practically…….. the guidance of the parish was left in his hands.” There is a Memorial window to him in the Sanctuary at St Michael’s. For more detail see the page long article about him in the St Michael’s Saints, 2009.

In June 1922, there were happier times for the family as Ralph, the younger of their two surviving sons, married Flora the eldest child of St Michael’s first vicar, Rev L McNeill Shelford. The marriage was extensively covered in both in the Chiswick Times of 30th June 1922 and the July/August edition of the Parish Magazine.

Ralph was a most capable amateur woodcarver and produced the Memorial Tablets relating to his father’s Memorial window and his wife’s grandfather, Prebendary Leonard Shelford, St Michael’s Church’s Patron which can be seen on the Sanctuary walls.

Ralph and Flora had two children, a son Michael and a daughter Sallie. Through this project, contact was made with Sallie. In February 2014, she visited Chiswick for the first time in some 65 years. During her time in Chiswick she was a most welcome guest at St Michael’s Church and was able to meet the current vicar, Rev. Martine Oborne.