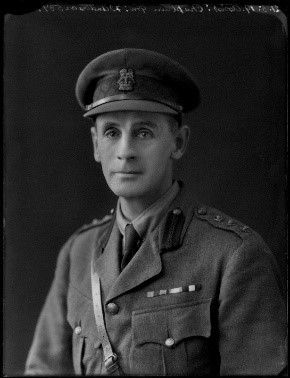 In the National Portrait Gallery’s collection there is a photograph of Rev. Anderson by Bassano (left). It was taken in 1919 just after he had been appointed as a Chaplain to the King. He is in uniform but he looks more scholarly than military. But his experiences during the First World War were anything but easy. He was a member of the British Expeditionary Force and was mentioned in dispatches four times.

Born in Chester in 1871, Frederick Ingall was at school at Bradfield where he played cricket for the first XI. After Jesus College, Cambridge he was appointed Curate at St. Sepulchre, Cambridge and then became Vicar of Northam and Westward Ho! During his time in Devon he married Annie Channer in Bideford. He spent 5 years in Cairo where the couple’s only son, Trevor was born. Then, after a few years in Shorncliffe and Caterham, war was declared and Rev Ingall began his military career.

After the War Rev Ingall served in Aldershot and Boldre (Kent) before being appointed at St Michael’s.

Trevor Ingall followed his father into the forces but was sadly killed towards the end of the Second World War, on 3 October 1945; he is buried in the Labuan War Cemetery in Borneo. Rev Ingall himself is buried in St Peter’s Church Cemetery, Thurston, Suffolk.